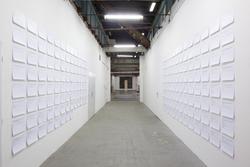 And it is precisely for the audience that this scenario unfolds. It is not a simulation of reality but merely a film technique: depiction of the meaning of the main characters by showing their power over the supporting characters; the importance of the discussion emphasized through the elimination of distracting elements. In the real world, can privacy be attained by commanding others to leave the room? And who are the heroes setting the tone for the discussion? And which conversations are actually at the center of events?

Experiment: For the center of events, let us take the most-read news website, and survey questions given to the readers shall serve as the conversation.

“Are you bothered by hyphenated female surnames that aren’t always easy to understand?”
“Would you watch an autopsy performed on an animal in public?”
“Is a solution to the conflict in Syria possible without Bashar al-Assad?”

We find ourselves in a space where we can shape social discussion, introduce topics. Somewhere between the real world and the fictitious one. In a space where the supporting cast has a voice, where the possible becomes reality. Let us preserve this space in our memory. Perhaps as a useful instrument.